How to Install KingRoot Android 2.3.5 Gingerbread APK for Android Mobile

There are many one-click rooting solutions out there for your Android device, but none of them root as many Android devices as the new KingRoot tool. Using the links you will find in the guide, you can check which devices can be rooted using the new KingRoot one-click universal rooting tool. The hardest part about using the tool is getting it on your device with a File manager. Once you figure that part out, the rest comes down to a single click and you’re done.

The KingRoot app is a Chinese application from a group of third-party developers associated with the XDA Developers. These KingRoot team members should not be associated with Google and this is not an official operation recommended by Google. If you do follow the guide below and install the Android 2.3.5 KingRoot APK on your Android device, you will void the warranty. Rooting Almost All Android Devices With The KingRoot Tool

2. Download the file directly to the desktop of your computer. It doesn’t matter if it’s Windows, Linux or Mac, so long as you can connect the device to the same computer.

3. Connect the Android mobile device to the computer with the USB cable.

4. Transfer the KingRoot file over to the internal SD card folder.

5. Once the transfer is complete, remove the Android mobile device from the computer.

6. Launch a File manager and install the KingRoot app on your device, just like you would with any other APK file. See: How To Install APK Files On Android Devices.

7. Launch the app from the app drawer once you know it’s on your device.

8. Click the Root button from within the app — you’ll see the button on the front and main app page.

9. Wait for the progress bar to reach 100% and a pass message to be displayed. 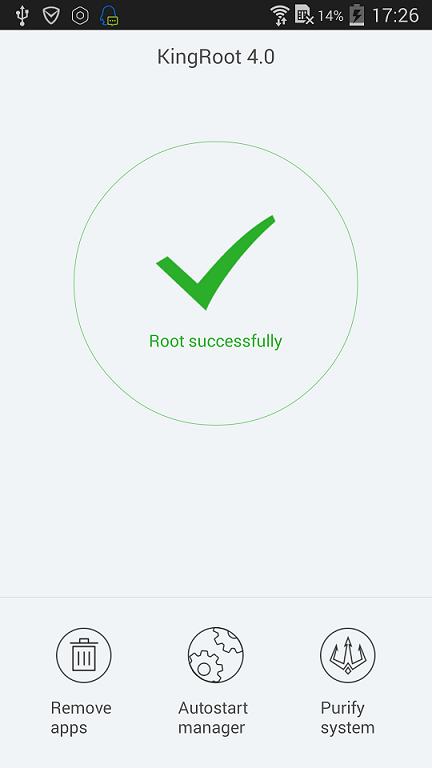 There is lots of information floating out there online about rooting and what it means, but not all of it is true. Rooting means you are now the boss of the operating system, and it is you who can choose to install and uninstall anything you like. Installing and uninstalling are almost always referring to apps. Now you can choose what system apps are removed from the phone carrier networks and manufacturers. Moreover, you can choose what apps are installed out of all the ones that would not install before because they needed a device with root access before they would run.

There are hundreds of apps that we recommend to people to install that require root access before they can run. Think of names like Titanium Backup that helps you backed the device much better than any other apps like Helium ever would (God bless you though Koushik Dutta). Think about Viper4Android that somehow can make the music coming out of your same set of headphones sound like you are using the best headphones ever created on earth. Think about the Tasker app that offers total automation and the chance for you to add additional features to existing features that stock Android does not offer. There are also root apps out there like Xposed Framework that can make your devices design different and deck it out like you have installed a custom ROM. The best part about Xposed is that you do not need to be unlocking the bootloader and installing a custom recovery like you normally would do if you were installing a real custom ROM. Every change is made to the Android software already running on your device.

If there is one downside to rooting Android it is that you should be an advanced Android user because for every application you try to install there might be malware out there wanting to make you believe that it is a real app, and you need to have the knowledge to know that the apps you are installing is a real app and not malicious. If you install malware, the Android security is not there to help you anymore. The other thing is that you need to have a knowledge of knowing where to find the root apps because there is no front page for rooting apps available from the Google Play Store. Nothing is pointing you in the right direction. You need to know the names of the root apps that you are looking to install and then install them on the device. We can help you with that by pointing you in the right direction of our article that lists many of the best root applications for the Android operating system. You can install any of these apps on your device after you rooted it with the universal one-click rooting tool called KingRoot.

Mat Diekhake is the editor of ConsumingTech.com. He has been inseparable from the internet since Web 2.0 in 2005, and by 2008 decided on a career in IT. With a never ebbing desire to cover technology, he spends most days consumed by Windows, Linux, and Android in particular. Though he has spent innumerable hours learning consumer software in general, formally and as an autodidact, and has personally authored over 10,000 articles since 2010. Microsoft awarded him numerous certificates resulting in him becoming a qualified Windows systems administrator (MSCA). Read Mathew's full biography. Mathew's social profiles: Twitter, Facebook, Instagram, LinkedIn, Github, Reddit.
« How to Root Sony Xperia SP» How to Install KingRoot Android 2.3.6 Gingerbread APK for Android Mobile