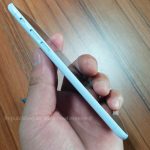 Due to its lack of success, we were not expecting a 2014 budget iPhone. However, Apple had publicly announced that they would bring out a similar device under a different name. We don’t know what that name is to be yet, so we are just calling this “budget” following on from last year.

None of that matters anyway, because we are 99% sure this is just a mock-up of the iPhone 6 done by people outside of the Cupertino campus and away from the real designers. It is a bare striking resemblance to a mock of what I saw last year before we did see the real iPhone 5C come out.

What is being dubbed as the “dummy” iPhone is black and white with the white taking up the sides and back cover. It is so detailed that it even has all of the buttons and holes in the sides and bottom.

To me, it is clear that it will not be the work that we see from Apple because the logo is not even visible. There is a slight chance that it could be an incomplete real smartphone and in its early design stages because we also know that Apple does change its mind as time goes on with ideas and that the end product does not come until a much later date. For now, we will not assume this is real and just enjoy what a smart designer has managed to come up with and create.

Right now, there is no talk of this year’s cheaper variant of the standard flagship, but if you are interested in what we think we know about the flagship version I will tell you now. Are sources say it will have a 4.8-inch screen, with others reporting a 4.7-inch screen and an 8-megapixel camera with an aperture size of F2.0. Other camera features include optical image stabilization, which will aid in taking better photos. As far as hardware goes, it is expected to carry an Apple A8 system chip and a 2600 MHz processor. The scheduled release is an unofficial June 2014. We expect that it to come at this time because that is the holiday in the United States and the favored time to launch it. However, due to time constraints with what is going to be a big year for the fruit company with Smartwatches and the possibility of phablet along with the standard flagship iPhone 6, it could be running late.

View these images and more via Nowhere Else

Mathew is a qualified Microsoft Windows systems administrator (MCSA) who has covered OSs, browsers, the internet, and related tech since 2011. He is the founder and editor of ConsumingTech.com and is a freelance tech writer for various publications around the Web. Mathew graduated from DDLS Melbourne (now Lumify). He grew up in Melbourne and lives in rural Victoria, Australia. Read Mathew's full biography. Mathew's social profiles: Twitter, Facebook, Mastodon, Instagram, LinkedIn, and Github.
« LG L80 Debuts In Southeast Asia» Leaked LG G3 Rendering Looks A Lot Like The iphone 6 Mockup