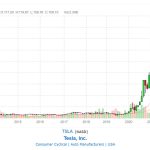 Tesla stock has dropped from a market cap of 1.2 trillion to 350.66 billion over the last 12 months. Elon Musk contributed to some of that selling by selling his own Tesla stock (insider transactions -93.83%). However, Musk also did several things that would help the stock including his most recent announcement that he would search for a new Twitter CEO which would give him the chance to focus on Tesla again.

Today, Tesla has an RSI of 16.56. I have never seen an RSI that low. It signals Tesla has sold off extremely quickly and may be oversold on a short-term time horizon.

Mathew is a qualified Microsoft Windows systems administrator (MCSA) who has covered OSs, browsers, the internet, and related tech since 2011. He is the founder and editor of ConsumingTech.com and is a freelance tech writer for various publications around the Web. Mathew graduated from DDLS Melbourne (now Lumify) in 2011. He grew up in Melbourne and lives in rural Victoria, Australia. Read Mathew's full biography. Mathew's social profiles: Twitter, Facebook, Mastodon, Instagram, LinkedIn, and GitHub.
« Roku Should Find Support at $45 – Dec 17, 2022» Roku’s $39 Stock Price Still May Be Too High – Dec 28, 2022