The following tutorial demonstrates how to get the Windows version/operating system version from PowerShell.

At times, it can be important to know your computer’s operating system version. This is most often due to the fact that features change between versions. Additionally, some programs require certain operating system versions to be installed as a minimum requirement. With Windows, there are several ways to find out the OS version. In Windows 11, the easiest for most is via the Settings app by navigating to Start > Settings > System About > Windows specifications. However, you can also peform this task from the command line.

How to Get Windows Version/OS Version in PowerShell

You can use a PowerShell command to get the Windows version/operating system version. Here is how to do that:

2. Type systeminfo into the command line and press the Enter key on your keyboard to execute it.

3. Scroll up and check next to where it shows the OS Name to see the Windows version. 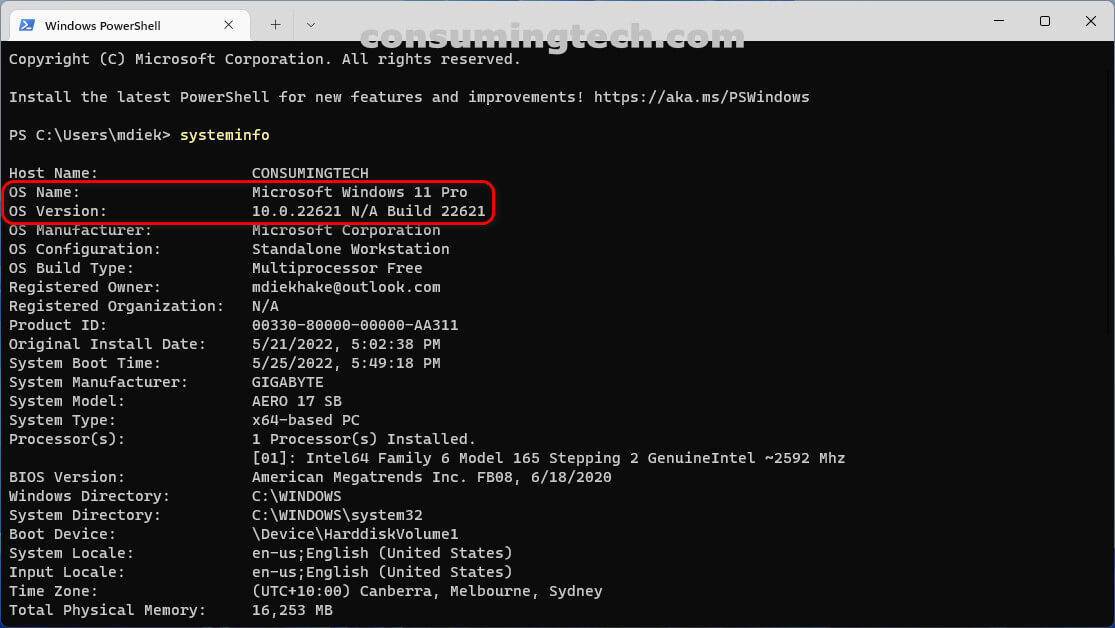 In conclusion, that is how to get the Windows operating system version in PowerShell.

Mat Diekhake is the editor of ConsumingTech.com. He has been inseparable from the internet since Web 2.0 in 2005, and by 2008 decided on a career in IT. With a never ebbing desire to cover technology, he spends most days consumed by Windows, Linux, and Android in particular. Though he has spent innumerable hours learning consumer software in general, formally and as an autodidact, and has personally authored over 10,000 articles since 2010. Microsoft awarded him numerous certificates resulting in him becoming a qualified Windows systems administrator (MSCA). Read Mathew's full biography. Mathew's social profiles: Twitter, Facebook, Instagram, LinkedIn, Github, Reddit.
« Fix: ‘Python’ Is Not Recognized as an Internal or External Command, Operable Program or Batch File» How to Get Powershell Module Version