How to Move Taskbar in Windows 11

Arguably the most dramatic change of all in Windows 11 compared to its predecessor is the taskbar and its associations. Gone is the symbolic left-aligned Start button Windows users have been accustomed to since Windows began with some brief exceptions—now it has been center-aligned to match macOS—though it is possible to customize it back into place.

Additionally, you can no longer click and drag the taskbar itself to the alternative three sides of the computer’s display as you could in previous versions of Windows. This feature change surprised me as I had just seen a working professional last year working from a 14-inch laptop, who needed the taskbar to be on the side of the screen or else it would eventually cause conflicts with the rest of her computer usage.

This tutorial demonstrates how to move the taskbar in a version of the Windows 11 operating system.

How to Move Taskbar Windows 11

You can change the location of the taskbar icons, as well as perform numerous other taskbar tweaks, from the Settings app in Windows 11. Here is how to do that:

3. From System’s left menu, click Personalization. And then from the right side of the same window, click the arrow next to Taskbar behaviors. Here you will find various taskbar settings that can be tweaked, including the following: 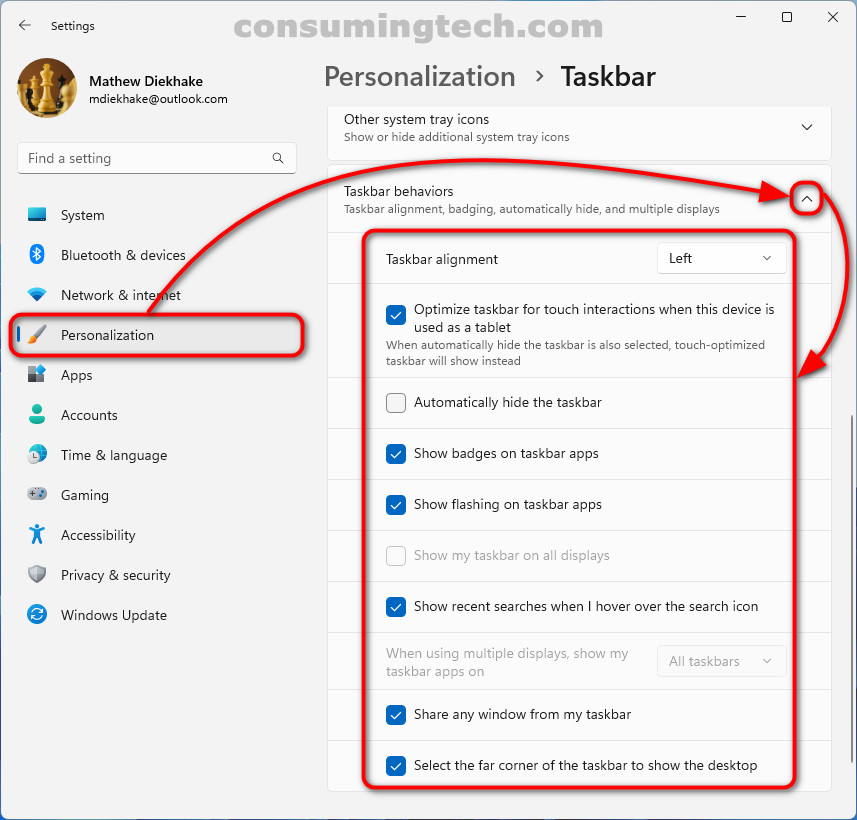 Part Two: Moving the Taskbar Itself around the Screen

You can move the entire taskbar to one of the other three sides of the computer’s ddisplay instead of keeping it in its default location (the bottom of the screen) by making a registry tweak in the Registry Editor app. Here is how to do that:

2. Using the Registry keys in the left pane, click through to the following path:

3. Double-click on the Settings binary key. 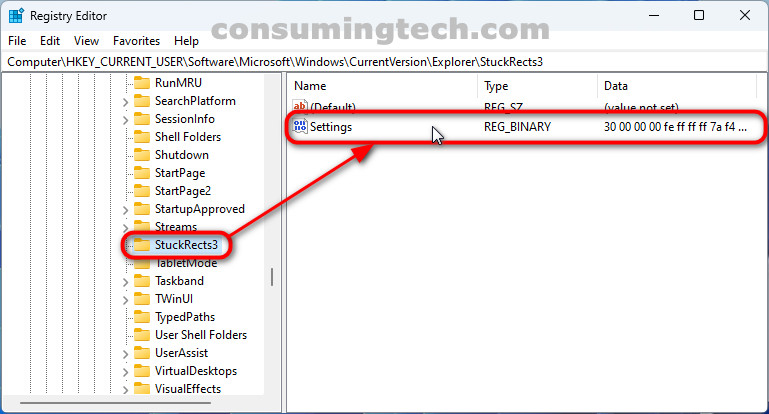 4. You now need to chnage the binary numbers to move the taskbar around the screen. Choose one of the following changes: 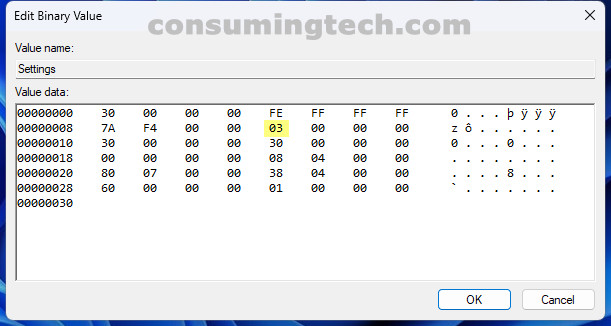 The Value data dialog, click OK to save the changes and then close the Registry Editor app.

in Windows 11 No Comments

Mat Diekhake is the editor of ConsumingTech.com. He has been inseparable from the internet since Web 2.0 in 2005, and by 2008 decided on a career in IT. With a never-ebbing desire to cover technology, he spends most days consumed by Windows, Linux, and Android in particular. Though he has spent innumerable hours learning consumer software in general, formally and as an autodidact, and has personally authored over 10,000 articles since 2010. He is a qualified Microsoft Windows systems administrator (MSCA). Read Mathew's full biography. Mathew's social profiles: Twitter, Facebook, Instagram, LinkedIn, and Github.
« How to Add to PATH on Windows 11» How to See Space Used on Disc All at Once