The Xiaomi Redmi Note 3 smartphone is the larger brother to the original Redmi 3 smartphone. It comes with a display that is an extra half an inch larger (5.5 inches) and also in two variants. One of the variants is a single SIM, and the other is a dual SIM. Both the single and dual SIM options have different processors (or system chips a.k.a SoC’s), and that is how you can easily identify them.

You need to be able to identify them if you plan on installing a custom ROM because the custom ROMs are either developed for the Mediatek processor of the Snapdragon processor. You can find out what version of the CPU chipset you have on the Redmi Note 3 by navigating to the Settings > About Device and then taking a look at where it shows you the model number. Additionally, the different processors are often sold in the various regions. For example, the dual SIM might not be available in the United States and the people getting the dual SIM are from the Asian countries. In other words, if you have a friend who is in the same country as you and the have the Snapdragon CPU, then yours will likely have it as well. 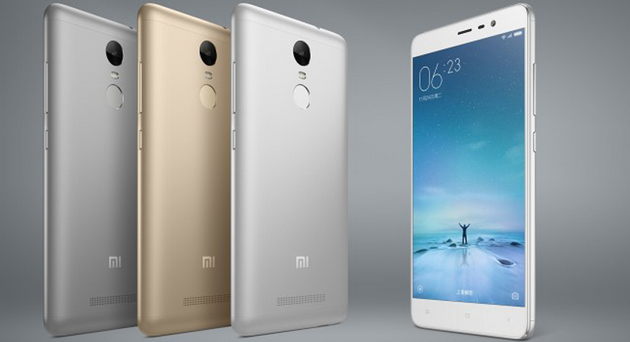 These are the best custom ROMs out there to be installed on the Xiaomi Redmi Note 3 smartphone for you to install today.

If you want to have a pure MIUI operating system that is running on the Android 6.0-Android 6.1 Marshmallow software updates, then you should check out this pureMIUI Marshmallow custom ROM. You can expect to find that this pure MIUI is like having the Android Open Source Project but instead of Android being the centrepiece of the operating system, it is now MIUI. The main difference being any bloatware from the phone carrier networks is now taken away.

It’s hard to tell what the developer is stating about this custom ROM because he isn’t writing in English. Usually, people must write in English on the XDA-Developers forum and if they don’t then the thread is deleted. But since this is a good custom ROM it looks like the thread has stayed up, but we just can’t understand what he is saying. If you are really interested in installing the pure MIUI custom ROM, then you might want to try Google translate and see what it says.

But arguably the best feature of this Resurrection Remix custom ROM is the fact that it is based on the Android 7.1.2 Nougat software update. To put that into perspective, the people with the Mediatek processor only have ROMs based on the Android 6.0 Marshmallow. Also, Android 7.1.2 is practically the newest version of Android that you will find installed on any device out there.

Note: this Resurrection Remix custom ROM is the most downloaded and installed custom ROM for the Xiaomi Redmi Note 3 smartphone to date, amassing over three-quarters of a million views and nearly two hundred thousand more downloads than any other ROM for the device.

Another hugely successful custom ROM for the Redmi Note 3 smartphone is this Nitrogen OS. The Nitrogen OS ROM has amassed over half a million downloads and installed. The main reason for that is much like the Resurrection Remix custom ROM listed above: it is based on the Android 7.1.2 Nougat software update as well. Don’t forget that the number one reason for installing a custom ROM in the first place is to try to update the device to a version of Android that never rolled out for the device. Also hugely popular is when a really new version of Android is available for people to try and they haven’t ever seen it before. That’s what’s happening here with the Nitrogen OS custom ROM.

With all of that being said, the Nitrogen OS is a great ROM and does come with some great features in its own right. It isn’t just all about the fact that it is based on the Android 7.1.2 Nougat software update—though that will always be the number one reason. Nitrogen OS is based on CyanogenMod, the Android Open Source project, DU and Pure.

The XenonHD 7.1 is another high-quality custom ROM available for the Redmi Note 3 smartphone. XenonHD is a name that many people know because the team builds custom ROMs for many devices, similar to CyanogenMod and Resurrection Remix (and Nitrogen OS to a lesser extent.) The 7.1 listed in the title isn’t the version of the custom ROM but rather the version of Android that it is based on (which is sure to make many people happy.) In other words, the XenonHD custom ROM is based on the Android 7.1 Nougat software update, and it will probably continue to be updated into the future with newer versions of Nougat too.

The XenonHD custom ROM is based on the CyanogenMod builds.

The unofficial version of the CyanogenMod 13 custom ROM is available for the Xiaomi Redmi Note 3 smartphone with the Mediatek system chip. These CyanogenMod custom ROMs are not being made anymore, but when they were, they were the best available out of any custom ROM. Their failure to still be making custom ROMs was not because they were not good. The CyanogenMod Inc. was the only custom ROM name that was a full fledged company, and when the company went bust, they also stopped making custom ROMs at the same time. Many of the developers from CyanogenMod are now working under the LineageOS name instead, so those are the best custom ROMs to be installing at the moment. You might also be aware that CyanogenMod wasn’t just a custom ROM for itself but was also being used as the source code and base for many other ROMs. The LineageOS name has taken over from that role and now provides the same kind of solid foundation for other ROM makers to use.

The CyanogenMod 13 custom ROMs are always based on Android 6.0 Marshmallow and go all the way through to Android 6.0.1 Marshmallow depending on how many updates they get. Generally speaking, if a lot of people are installing the ROMs, then they will keep getting updated. But the CyanogenMod 13 never goes up above Marshmallow, so if you ever get a Nougat ROM, it will then be called LineageOS for that Android 7.0 and above version.

No one really prefers having an unofficial build over an official one, but that doesn’t mean that you can’t get stable unofficial custom ROMs. The 5.5.9 version of the Resurrection Remix custom ROM that is available here is a good one even though the developer who ported the ROM over from another device doesn’t speak excellent English. That doesn’t mean it’s not high-quality work. We are starting to see skilled developers who can’t talk English very well.

One of the problems you can find with unofficial custom ROMs though is some of the features not working like they would if the official custom ROM was available and sometimes the features don’t work at all. The problems with things not working are usually listed in the original post where you can find the download link. In this instance, the original poster has listed that the 4G connection only works with the first SIM card slot. The second SIM card slot can only use 2G. That’s not a huge deal, and some smartphones come out with this by default. The other issue that has been noted by the original developer is the fingerprint sensor might not be working either.

By far the custom ROM for the Xiaomi Redmi Note 3 that has amassed the most views, the CyanogenMod 12.1 custom ROM is based on the older Android Lollipop and comes with the working fingerprint sensor. The fingerprint sensor was obviously one of the highlight features on smartphones over the last few years. This fingerprint reader is built into the devices themselves, but if the operating system isn’t able to use it, then it becomes a waste of space. Sadly, that has been the case with many custom ROMs over the time since it’s been out for technical difficulties we don’t know how to explain. If ever you can find a custom ROM—like you do have here with the CyanogenMod 12.1 custom ROM—that has the fingerprint reader working, then you can rest assured that it is going to be used by many people.

Another reason why this CyanogenMod 12.1 (The older versions of CyanogenMod) has so many downloads is that it is older and more people were checking out the ROMs available back then. If it were me looking for a ROM to install today, I’d probably go with the CyanogenMod 13 instead because it’s newer.

Xiaomi Redmi Note 3 owners aren’t having much luck with getting official custom ROMs developers so far on the list, but the names of the unofficial ROMs are good. The Bliss Pop custom ROM is a favourite to many. As we’ve already said, unofficial builds can have some additional bugs or even features not working. Some of the functions that are listed as not working for this version of the Bliss Pop custom ROM include the fingerprint sensor and the 4G for the second SIM card. You can only use the 2G on the second SIM (because this is a dual SIM smartphone with the Mediatek system chip.)

Bliss Pop version 4.0.3 for the Redmi Note 3 smartphone is based on the Android 5.1 Lollipop software updates and may be updated to newer version of Lollipop such as the Android 5.1.1 software update. However, it will never go up any higher than Lollipop. The update to Marshmallow–if the Bliss Pop ROM ever provides it—will be given a new version number.

Mat Diekhake is the editor of ConsumingTech.com. He has been inseparable from the internet since Web 2.0 in 2005, and by 2008 decided on a career in IT. With a never-ebbing desire to cover technology, he spends most days consumed by Windows, Linux, and Android in particular. Though he has spent innumerable hours learning consumer software in general, formally and as an autodidact, and has personally authored over 10,000 articles since 2010. He is a qualified Microsoft Windows systems administrator (MSCA). Read Mathew's full biography. Mathew's social profiles: Twitter, Facebook, Instagram, LinkedIn, and Github.
« Best Custom ROMs for Sony Xperia Z5 Premium» Best Custom ROMs for Google Pixel