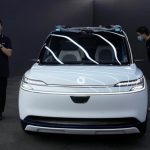 Google’s only search engine competition comes from Baidu. Market Watch reported today that even with the worldwide recession, China is expected to produce more millionaires over the next four years than any other country.

Google has a market cap of 1322.66 billion — and that’s after the recent sell-off which may not go down much further. Baidu, on the other hand, has a market cap of a mere 45.20 billion. Baidu has recently announced that it plans to make its own vehicles for the robotaxi revolution, meaning Baidu stands to profit a lot from driverless cars over the next decade. Baidu has already started offering driverless vehicle rides in China. And they’ve had more success doing it than Google or any other company.

Baidu’s search engine gets roughly 6 billion monthly views. Google’s search engine gets a little more than ten times that amount. That means just based on advertising alone, before long Baidu’s stock price could be justified at roughly ten times more than where it is today, with a valuation of around 450 billion dollars. And that’s not considering the fact that Baidu could justify a market cap similar to perhaps a Nio or an Xpeng as it makes money from its own robotaxi car service in the future.

Traders may be reluctant to put money on Baidu today because when they see a 45 billion dollar market cap, it seems as though Baidu’s stock has a high valuation. But traders shouldn’t forget to compare it properly to its competition. There is plenty of room for Google’s stock to run higher over the coming decade. I wouldn’t be surprised if Google’s stock price doubles in that time. And though I prefer Google because its search engine focuses on English queries, many other languages use Google. And AI might make Baidu more accessible to non-Chinese native people than we might think. Worst case scenario, Baidu remains mostly used by Chinese-speaking people and still grows exponentially provided the Chinese economy does, too.

Mat Diekhake is the editor of ConsumingTech.com. He has been inseparable from the internet since Web 2.0 in 2005, and by 2008 decided on a career in IT. With a never ebbing desire to cover technology, he spends most days consumed by Windows, Linux, and Android in particular. Though he has spent innumerable hours learning consumer software in general, formally and as an autodidact, and has personally authored over 10,000 articles since 2010. He is a qualified Microsoft Windows systems administrator (MSCA). Read Mathew's full biography. Mathew's social profiles: Twitter, Facebook, Instagram, LinkedIn, and Github.
« If You Believe In Robotaxis, You Believe In Lyft» Is This the Final Capitulation of the Bear Market? – Sept 23, 2022