Dona Sarkar and Brandon LeBlanc took to the Windows blog to announce the release of Windows 10 Insider Preview Build 18885 (20H1).

This particular update includes changes to the Your Phone app, the expansion of dictation support to include more countries, a new Feedback Hub version, narrator improvements, loads of general changes, and a list of new known issues with it as well.

The Windows Insider program is aimed at developers to help Windows find out what is working well and what needs fixing, so you’re encouraged to leave more feedback about any issues that you think aren’t yet on the known issues list.

Microsoft has extended screen mirroring from the Windows 10 Your Phone application to more Android-powered smartphones. The original list of compatible devices included Galaxy S8, S8+, S9, and S9+ models only. Now the new list is expanded to include OnePlus 6, OnePlus 6T, Samsung Galaxy S10e, S10, S10+, Note 8, Note 9 smartphones. You should note that even if you do have one of those devices, you’ll still need a Windows 10 computer that supports the Bluetooth Peripheral role.

The new Windows Insider preview build also comes with Android smartphone notifications with the Your Phone app. With them, you can stop reaching for your phone to check your notifications because now they’re available to view from your computer’s display as well. To get the Android notifications on your PC, you’ll need a smartphone that runs at least Android 7.0 and has no less than 1 GB of RAM in its hardware specs. 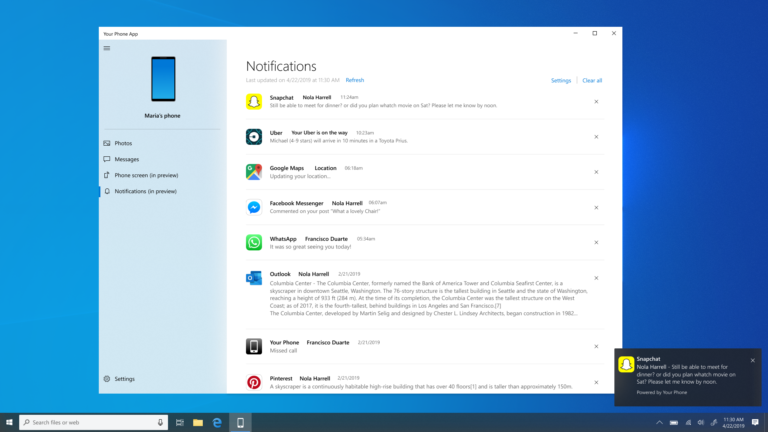 The Windows 10 operating system has had support for dictation if you had your language set to US English. This has meant that users with US English turned on could get some tips on how to spell words when using some Windows 10 applications such as the Notepad. Now that dictation support is expanding from US English to include English (Canada), English (UK), English (Australia), English (India), French (France), French (Canada), German (Germany), Italian (Italy), Spanish (Spain), Spanish (Mexico), Portuguese (Brazil), and Chinese (Simplified, China).

According to Microsoft, some users were requesting for the Feedback Hub to offer people who have a language that isn’t set to English to still be able to read the feedback results in English. While it may sound like an unusual request, the Microsoft developers have obliged, and you will now find this feature available.

To see the full list of features, general changes, and improvements, as well as the list of known issues, you can read the full blog post from the source below.

Your Phone Windows Insiders we are now rolling out more supported devices for our Phone Remoting feature including Samsung Galaxy S10, S10+, S10e, Note 8/9 devices as well as OnePlus 6/6t!

Hi #WindowsInsiders! We’ve released an update to unblock those of you in the Fast ring who were blocked from getting the latest 20H1 builds AND released a new 20H1 build for you today. https://t.co/b8q0K2kPcw

Mathew Diekhake is a certified Microsoft Systems Administrator from Australia and also the founder and editor of ConsumingTech.com. With a never ebbing desire to cover technology, he is mostly consumed by Windows and Android. However, he has spent stacks of hours learning about a variety of computer software, both formally and informally, and has authored tens of thousands of tutorials and news articles since 2011. Mathew has obtained many Microsoft certificates and is a qualified Systems Administrator (MSCA). Read Mathew's full biography. Mathew's social profiles: Twitter, Facebook, Instagram, LinkedIn, GitHub.
« How to Remove Fake Ransom Fake Ransomware (Malware Removal Guide) » How to Remove Advanced PC Tuneup System Optimizer (Malware Removal Guide)