The Maps app comes preinstalled in Windows 10. Maps was initially designed for the Windows 10; however, since the usage of Windows Phone has declined and Windows 10 is a universal operating system, Maps has been available for all computers as well.

Maps is your guide to everywhere. Find your way with voice navigation and turn-by-turn driving, public transport, and walking directions. Search for places to get directions, business information, and reviews. Download maps to use when you’re offline. Tour the world virtually with breathtaking aerial imagery and 360-degree street-level views. Plus, you get the same experience across all your Windows 10 PCs and phones.

The following tutorial demonstrates how to turn on and off the automatic updates that the Maps app gets when you’re not on the internet (offline) and when you’re using a version of the Windows 10 operating system.

3. From Apps’ menu, click on Offline maps and then use the toggle under the Map updates heading to turn on and off the Automatically update maps setting. (click to enlarge screenshot below) 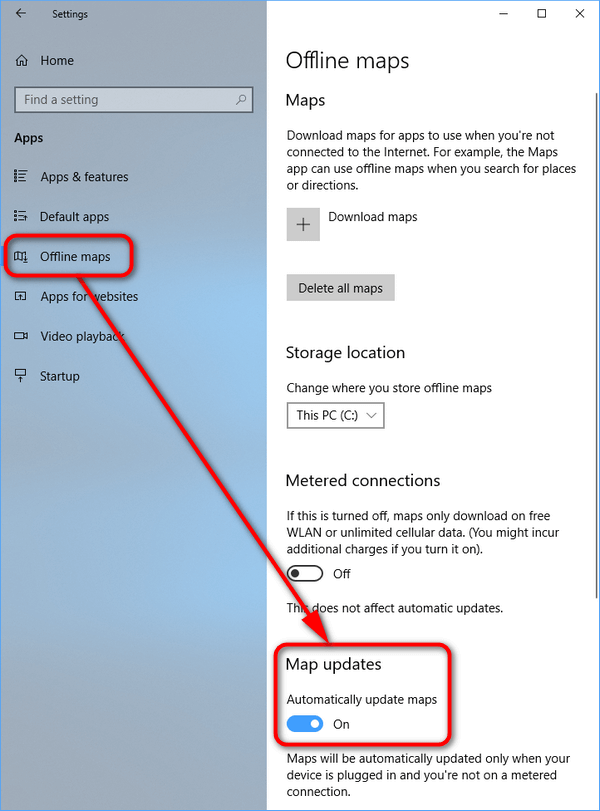 4. To turn offline maps automatic updates on, switch the toggle to On. (click to enlarge screenshot below)

5. To turn offline maps automatic updates off, switch the toggle to Off. (click to enlarge screenshot below)

Mathew is a qualified Microsoft Windows systems administrator (MCSA) who has covered OSs, browsers, the internet, and related tech since 2011. He is the founder and editor of ConsumingTech.com and is a freelance tech writer for various publications around the Web. Mathew graduated from DDLS Melbourne (now Lumify) in 2011. He grew up in Melbourne and lives in rural Victoria, Australia. Read Mathew's full biography. Mathew's social profiles: Twitter, Facebook, Mastodon, Instagram, LinkedIn, and GitHub.
« Use Disk Cleanup in Windows 10» Turn On/Off ‘Ignore Touch Input when Using Pen’ in Windows 10