Many people opt to buy the LG Leon for the specs and price and not so much the stock version of Android that is heavily modified by the Life’s Good company. If you are in the same boat, then you probably know all about these things we call custom ROMs which are new ROMs that are made by third-party developers and not the typical Android developers. A custom ROM can help people enjoy the software that is running on the LG Leon smartphone is a lot more than they currently are, they do this by offering something different.

If the term “something different” sounds vague, it is because there are heaps of various reasons why installing a custom Rom is going to be different than the stock Rom and why people might want to do it. For starters, a custom ROM often removes the system apps that companies like LG install on the system partition. They install the applications they want on the phone on the system partition so we cannot remove them without root access to the internal system. Anyone who does not want to root the LG Leon smartphone can unlock the bootloader, install a custom recovery and then root the smartphone instead. A custom ROM often comes debloated (but not always) and the debloated ROM is referring to the removal of the system apps. The effects of having a debloated ROM running are it will operate quicker than before, and the battery lasts longer too. 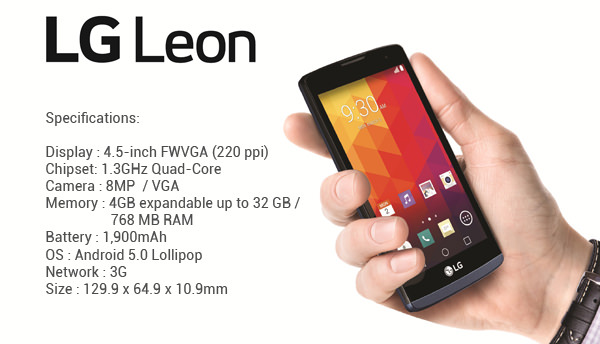 Having a debloated ROM with the system apps (or stock apps) removed is one of the main reasons for people wanting to install a custom ROM, but there are also many other reasons. One of the other common reasons for swapping the stock Rom for a custom version is installing newer versions of Android. A mobile device has a limited lifespan with hardware, and the software lifespan is much less yet again. Manufacturers and phone carrier networks stop supporting devices in the hope that people will upgrade their devices again to try the newer versions of Android. They often do this when there is no reason why the older hardware cannot run the newer software. For all those times you would be unlucky not to find at least one custom ROM out there made by somebody that can help you upgrade. Often there are plenty of excellent custom Roms that can do this too like the work from the CyanogenMod team for example. It all just depends on what smartphone it and how popular that phone is with the people. Since there is limited funding in the world of custom Roms, the developers usually develop Roms that are going to be used more which means creating ROMs for the more modern devices.

Details You Should Know

The Xenon HD custom ROMs are based on the Android Open Source Project (AOSP for short), and these ROMs are available for many devices online because they are so good. Widely regarded as one of the best custom ROMs on the planet, the Xenon HD builds on the stock version of Android and makes it even better with more features and an elegant yet simple style that most people will enjoy. The Xenon HD custom ROM is easy to set up and choose the features that you want to have running on the LG Leon. You can visit the ROM settings page and make changes to the status bar, lock screen, notification drawer, expanded desktop, sounds, buttons, Slim recents and more. It comes with its privacy guard that offers which applications can have access to the system, as well as offering your blocked caller list and filter notifications. Lastly, the Xenon HD custom ROMs offer the all-important layer support which allows you to easily install overlays.

The CyanogenMod team is still making what is regarded the best custom ROMs in the world by most people. There is not an official build developed for the LG Leon which means the CyanogenMod team has not spent time making a ROM for the LG Leon. However, there is an unofficial build of CyanogenMod 12.1 made available to install that is tested and works. An unofficial custom ROM usually refers to a ROM that has been ported over from another device that is was originally made for, and that is why they call it unofficial. An unofficial custom ROM should not be relied on as well as the real deal because it does not have the official teams seal of approval, but if they are made available, then they usually work well enough to satisfy most people’s impulses. We just don’t recommend installing unofficial builds on things like your work phones because they might not offer that kind of quality.

The Xenon HD and the CyanogenMod 12.1 custom ROMs are the only two custom ROMs available for the LG Leon smartphone at the time of writing this article. We will update the post when we can see that more have become available. However, just because we have not updated the post does not necessarily mean there aren’t more that exist, we just might not be quick enough! People can check out the XDA-Developers forum for more ROMs if they are wondering if anything else is available. The ROMs are always posted on that forum first.

Mathew is a qualified Microsoft Windows systems administrator (MCSA) who has covered OSs, browsers, the internet, and related tech since 2011. He is the founder and editor of ConsumingTech.com and is a freelance tech writer for various publications around the Web. Mathew graduated from DDLS Melbourne (now Lumify) in 2011. He grew up in Melbourne and lives in rural Victoria, Australia. Read Mathew's full biography. Mathew's social profiles: Twitter, Facebook, Mastodon, Instagram, LinkedIn, and GitHub.
« Custom ROMs for Samsung SGH-I957 [List]» Custom ROMs for Nokia X2 [List]