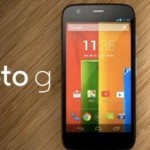 If you own the Motorola Moto G 2013 smartphone be sure to check the notifications panel for a new OTA update ready for installation. The new iteration ups the build number to 210.12.40 and boosts the software to Android 4.4.4 KitKat. This is likely the last we see of the KitKat name before the Android 5.0 Lollipop begins rolling for the Motorola Moto X, Moto G, and Moto E. Users of the low-end smartphone residing in the UK have already had the pleasure of installing this version. However, those with the international model number and the US-based phone have not been so lucky yet. Today we announced the international model is starting to see the over-the-air signals now and we know the US version is next. Rumors suggested towards the end of the week, but now we are hearing it could be as soon as today.

The newfangled software update comes with a revamped phone dialer with a different color blue and a unique UI. Motorola Alert Application is available from the Google Play Store, ability to pause the video recording when using the camera feature, Open SSL security fix, and better stability, framework, and accuracy improvements. Additionally, we know there are several bug fixes, Google security patches, and some extra goodies that make up a grand total of 21 Mbs in size. For a system update that’s still on the smaller side. Users will have much more fun with the Android 5.0 Lollipop coming soon with the innovative material design, original notifications menu, and more.

You should understand that all OTA updates roll out in stages and will arrive at different times for each user. There’s no way of predicting when that time of the day is for you. The full release can take days or even weeks depending on how many owners there are of the aforementioned handset. In this instance we know there are a lot so don’t be surprised if it takes a week.

You should remember that Moto G owners are in a great place now since this year’s Nexus 6 is made by Motorola. That means we anticipate Google looking after the Motorola range with Android 5.0 Lollipop nicely since the nexus range is always Google-owned. However, being the first generation Moto G, several phones and tablets will come ahead of this handset.