Top 10 Games to Play on iPhone 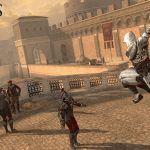 The iPhone is a beautiful creation of the Apple Inc, packed with iOS supporting over thousands of Apps, Games. Here, I have collected Top 10 Best iPhone Games; you will surely like them. After each game, there’s a download link which you can use to get it from the iTunes store.

Angry Birds is the most popular game nowadays. It is available on almost all the platforms including iPhone (iOS), Symbian, etc. This game is available in the iTunes store at the cost of $0.99. But for this excellent game, one shouldn’t look at this low price. Download and start taking the revenge against the pigs!

Be a ninja and slice up all the fruits. The game is based on the Ninja style allowing the player to slice the fruits into pieces. It is a magnificent game for your faster finger practices on the iPhone. The game costs $2.99 and is available in the iTunes store.

The real excitement of the Rollercoaster has reached the iPhone store, letting you feel the original Rollercoaster Ride along with many tricks. With the multiplayer support, you can challenge your friends to beat you in the all eight tracks of this game. Get it from the iTunes store!

An Action-Adventure game with lots of thrilling actions. Taking enemies down with guns, flying in the airplanes to destroy the enemies hiding places. The effects throw an exciting feeling in the game.

Falling in the mystery of an assassin, the Assassin’s Creed game has already hit the PC platform and now going to hit the iPhone. With the roaming facility, the player gets more freedom while playing the game and solving the missions. Use the given powers to defeat the enemies and to get access to the next level.

How can we forget Spiderman when we talk about Adventure? The Spiderman Total Mayhem for iPhone gives you the spiderman powers on your fingertips, just touch and have fun in the game. The game is great, and I love to play this game, because of the fantastic powers Spiderman having.

When it comes to racing, the game GT Racing comes in mind. With many tracks and cars, the game has always been a choice of the racers. While playing the game, you can feel the horripilation of the car driving. Steering-view of the game is superb; I like it.

How to Train your Dragon

Descended from the movie How to Train your Dragon, the game continues to teach you skills of training the dragon. Calibrate with your fingertips, Teach your dragon new skills and everything’s fun.

Putting Galaxy in the fire, just throw down the things coming on the path and follow the maps. Your position will be listed on the map allowing you to find yourself in the game. Buy Weapons from the in-game store and apply them to the action.

Create the city of your imagination, take advantage of technology and make your town, a wonderful city. You can design your city with whatever things you want.

These Top 10 Best iPhone Games will surely let you enjoy the iPhone gaming experience at its best. If you think that an individual game should be included in the list, then comment its name below.

Mahesh is a technology enthusiast who loves everything about tech, be it Apple, Google, Android, iOS or any other cool gadget. He enjoys covering tips and tricks for consumer software such as Android, Mac, and iOS. He spends most of his time thinking about new helpful tips in front of his Mac but also knows mobile operating systems very well. Mahesh has been writing online for nearly a decade and has written for some of the most renowned websites in the world, including Make Tech Easier and The Unlockr.
« How to Fix the iTunes Error Code 3194» How to Delete Lots of iPhone Photos in Groups from iOS 8