How to Specify Target Feature Update Version in Windows 11

The following tutorial demonstrates how to specify target feature update version when using a version of the Windows 11 operating system.

Microsoft releases one new feature update for Windows 11 each year. Historically, regardless of the operating system, you had to upgrade to the newest software update because the companies always want you running on the latest software. While there are valid reasons for this that are unlikely to change for a long time — compatibility, added security, so forth — Microsoft in Windows 11 has made it possible to specify which Feature Update you would like to have installed, so you don’t always have to be on the latest one. What exactly does that mean for security concerns and compatibility woes? They’re likely still going to be there for some users, which is why this is only an option for experienced administrators to perform via Group Policies rather than a toggle for dummies to turn on and off from the Settings app.

You can specify what Feature Update you want installed on your computer that runs on Windows 11 via the Local Group Policy Editor. Here is how to do that:

Note: If you have enabled the Select the target Feature Update version policy and specified the target updates you would like to receive and don’t ever change the policy again in the future, the computer will automatically be updated as of 60 days past its end of service date.

3. With Manage updates offered from Windows Update selected, click on the Select the target Feature Update version policy in the right side of the same window. 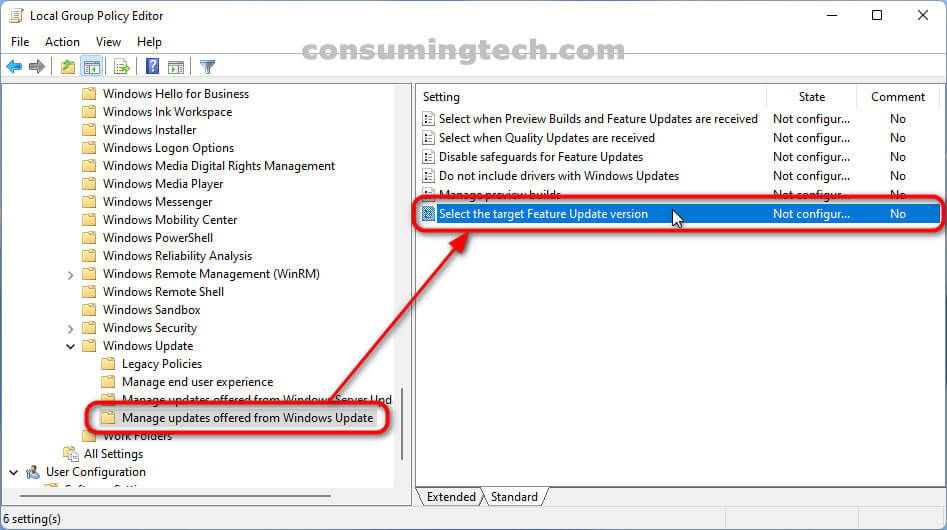 Note: If you have selected dot Enabled, you will see under the Options: heading the ability to add your Windows version and the target version for the Feature Updates. In these available fields is where you must enter the information for the specified updates. 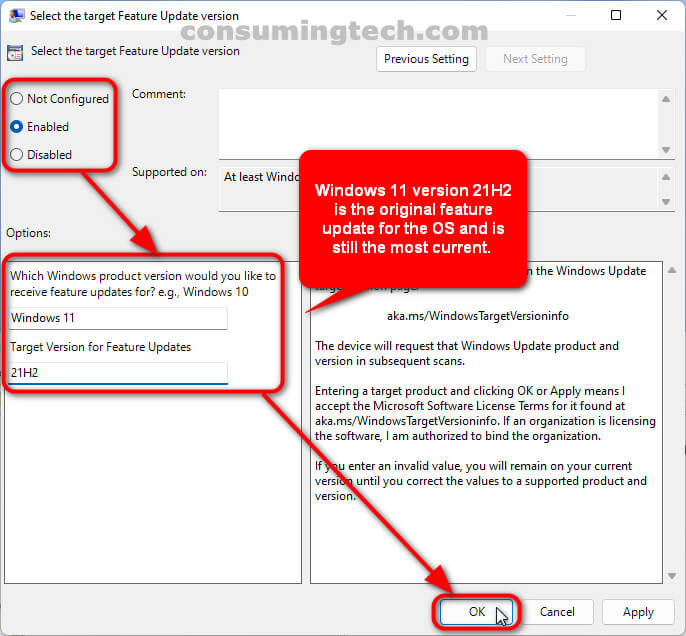 In conclusion, that is how to specify the target feature update version vua the Local Group Policy Editor in Windows 11.

Mat Diekhake is the editor of ConsumingTech.com. He has been inseparable from the internet since Web 2.0 in 2005, and by 2008 decided on a career in IT. With a never ebbing desire to cover technology, he spends most days consumed by Windows, Linux, and Android in particular. Though he has spent innumerable hours learning consumer software in general, formally and as an autodidact, and has personally authored over 10,000 articles since 2010. Microsoft awarded him numerous certificates resulting in him becoming a qualified Windows systems administrator (MSCA). Read Mathew's full biography. Mathew's social profiles: Twitter, Facebook, Instagram, LinkedIn, Github, Reddit.
« How to Enable/Disable Shared Experiences in Windows 11» How to Turn On/Off Show Accent Color on Title Bars/Windows Borders in Windows 11