Windows Internet Watchdog is a fake antimalware application that acts as though it is an antivirus app.

Tips for Avoiding Malware in the Future

If you have malware on your computer, you can always install an antimalware program and run a scan to try to remove it. But some experts suggest that even if you do that, it is not a given that all malware can be removed—once it gets access to your system, it might not ever get taken away.

So naturally, that means you should try preventing the malware from getting on your computer in the first place.

Here are some of the most common ways you can avoid getting malware on your PCs:

The following tutorial demonstrates how to remove the Windows Internet Watchdog fake antimalware application from your computer.

Note: The terms “Potentially Unwanted Programs” (PUPs) and “Potentially Unwanted Applications” (PUAs) are interchangeable. When referring to misleading software installed as a bundle or without users’ consent, common antimalware programs use the term “PUP;” however, Microsoft prefers “PUA” in Windows 10.

Part One: How to Enable or Disable Windows Defender PUP Protection in Windows 10

When removing Potentially Unwanted Programs from your computer with the default Windows Defender antivirus, you should enable PUP protection first. Here is how to do that:

Option One: How to Enable or Disable Windows Defender PUP Protection in Windows PowerShell

3. Type one of the following commands into the Windows PowerShell window, depending on what you want to achieve, and then press the Enter key on your keyboard to execute it:

Audit Mode – detects PUPs, but does not block them:

4. Restart the computer before attempting to run a new Windows Defender antivirus scan that searched for extra PUPs.

You can now close the Windows PowerShell window and continue using your computer if you like. 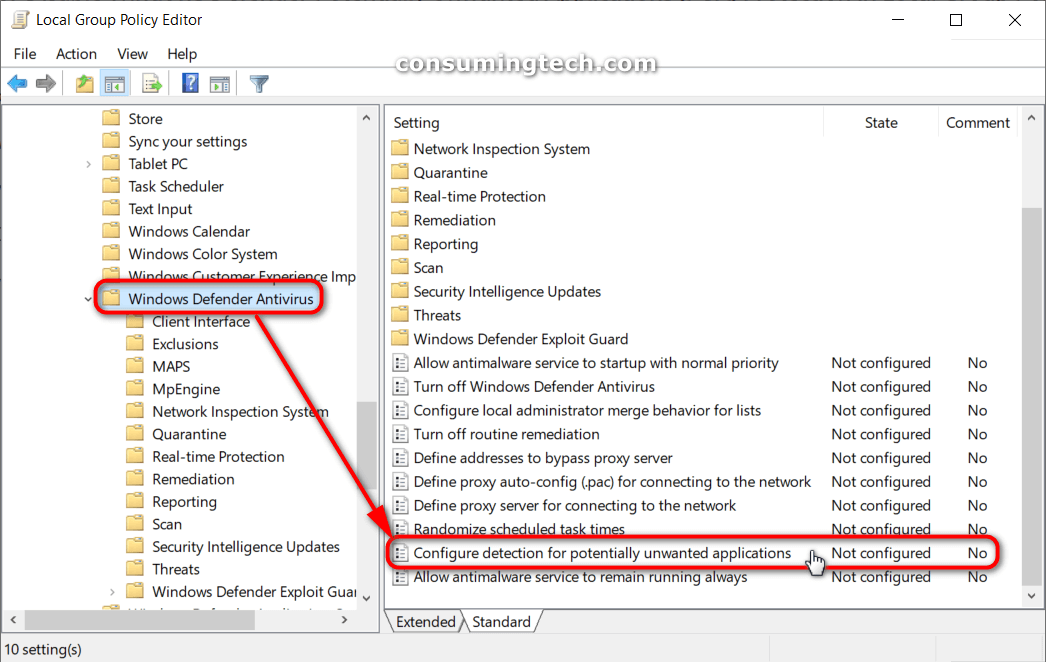 Note: If selecting Enabled, a drop-down menu appears in the Options window that offers additional options to configure the group policy if you like. For example, from the drop-down menu, you can select Blocked which means the Configure detection for potentially unwanted applications policy will be enabled, and the potentially unwanted programs will be blocked from being downloaded onto your computer. It is suitable for most people to select Blocked from the drop-down menu in the Options window to stop PUPs getting onto your computer in future. 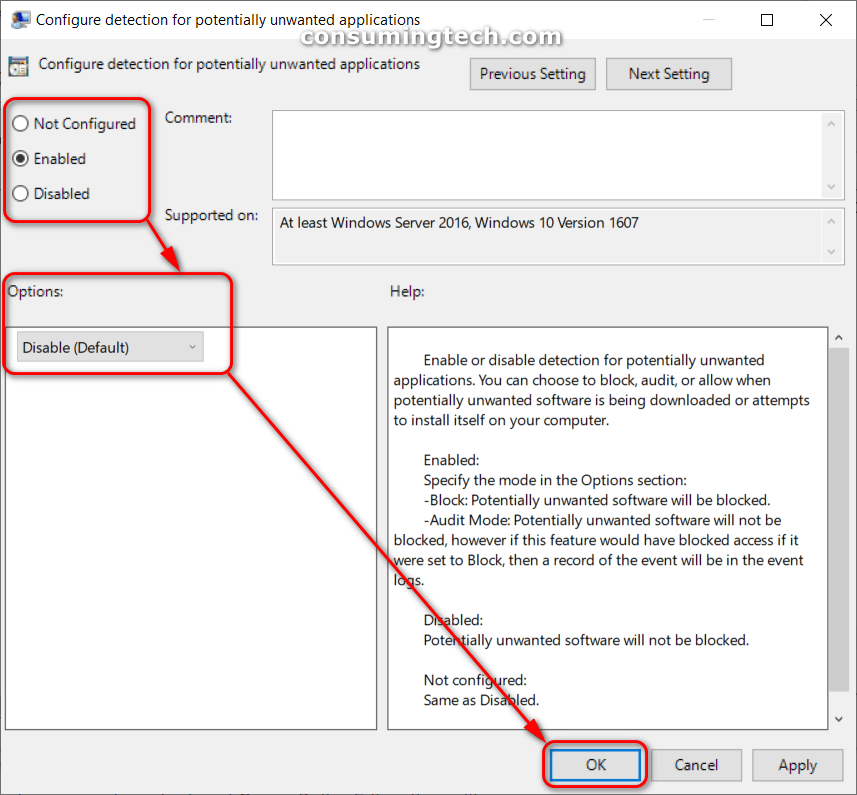 You can now close the Local Group Policy Editor and continue using your computer if you like.

Part Two: How to Manually Scan Files, Folders, and Drives with Windows Defender in Windows 10

Windows 10 provides the latest antivirus protection with Windows Security. Your device will be actively protected from the moment you start Windows 10. Windows Security continually scans for malware (all types of malicious software), viruses, and security threats. In addition to this real-time protection, updates are downloaded automatically to help keep your device safe and protected from threats.

Some features differ if you are running Windows 10 in S mode. Because this mode is streamlined for tighter security, the Virus & threat protection area has fewer options. However, that does not mean it is less secure—the built-in security of this mode automatically prevents viruses and other threats from running on your device, and you will receive security updates automatically.

Windows Defender automatically scans your system periodically, so it should pick up and remove any malware on your computer by itself over time. If you need a quick solution, Windows Defender also allows for manual scans so that you can scan any location on the operating system immediately.

Note: The Windows Defender antivirus application shown below comes out of the box on all versions of Windows 10, the latest version of Windows operating system. If you are running an older version of Windows, such as Windows 7, then you can skip to one of the next parts that shows you how to install a third-party antimalware application instead.

Option One: How to Scan with Windows Defender Using Context Menu

Here is how you can run an antivirus scan with the built-in Windows Defender antivirus program from the context menu of a file or folder:

1. From File Explorer, select the drive, folder, or file that you suspect may contain the potential malicious program.

2. Right-click on Scan with Windows Defender from the context menu. (click to enlarge screenshot below)

3. When the scan completes, Windows Defender Security Center will open and show you the results. The total time for the scan to complete will vary. Scanning drives will take the longest, while scanning individual files the quickest.

Note: The Windows Defender Security Center has been renamed to Windows Security in newer versions of Windows 10. All the settings within the app remain the same.

4. If the scan did find threats, you can Start actions or See threat details. (click to enlarge screenshots below)

Note: Clicking on Start actions will result in Windows Defender removing the threat immediately whereas choosing See threat details allows you to see the threat and also choose what you want to do with it more specifically.

You can now close the Windows Security app and continue using your computer if you like.

Here is how you can run an antivirus scan with the built-in Windows Defender antivirus program from the Windows Security app:

2. Click on the Virus & threat protection icon in Windows Security’s Security at a glance page.

3. To Run a Quick Scan with Windows Defender

4. To Run a Full Scan with Windows Defender

a. Select Full scan and then click on the Scan now button.

5. To Run a Custom Scan with Windows Defender

a. Select Custom scan and then click on the Scan now button.

6. Select the file, folder, or drive that you want to scan and then click Select Folder. (click to enlarge screenshot below)

7. Windows Defender starts scanning the option that you chose.

8. When the scan completes, you get the results in numbers.

9. If Windows Defender did find threats during the scan, you can Start actions or See threat details.

Note: Clicking on Start actions will result in Windows Defender removing the threat immediately whereas choosing See threat details allows you to see the threat and also choose what you want to do with it more specifically.

You can now close the Windows Security app and continue using your computer if you like.

Option Three: How to Scan with Windows Defender from Windows PowerShell

Here is how you can run an antivirus scan with Windows Defender from the Windows PowerShell:

2. Type the command below that best suits your needs and then press the Enter key on your keyboard to execute it.

You can now close the Windows PowerShell window and continue using your computer if you like.

Option Four: How to Scan with Windows Defender from Command Prompt

Here is how you can run an antivirus scan with Windows Defender from the command line:

2. Type the command below that best suits your needs and then press the Enter key on your keyboard to execute it. (click to enlarge screenshot below)

You can now close the Command Prompt window and continue using your computer if you like.

Note: Malwarebytes also has an application for smartphones that run on Android and iOS. Here is a tutorial for how to install Malwarebytes on Android; the iOS version will be very similar apart from needing to use the Apple App Store in place of the Google Play Store. You will not have any problems finding it because your iOS software only comes with the Apple App Store.

2. If prompted by your web browser with a message that says “This type of file can harm your computer. Do you want to keep the executable (.exe) file anyway?,” click on the Keep button.

3. If you are prompted by User Account Control asking “Do you want to allow this app to make changes to your device,” click on the Yes button.

4. Click on the Scan Now button to begin scanning the computer for malware and other potentially unwanted programs. (click to enlarge screenshot below)

5. Wait for the scan to complete. (click to enlarge screenshot below)

6. Select all of the malware and potentially unwanted programs that you want to be removed from the computer and then click on the Quarantine Selected button. (click to enlarge screenshot below)

7. You may get a message from Malwarebytes letting you know that all selected items have been removed successfully, but the computer must be restarted before the removal process can be completed. Select the Yes button to reboot your computer now. (click to enlarge screenshot below)

8. Upon signing back in to your computer, the Malwarebytes interface will open and let you know that the scan and quarantine are complete. (click to enlarge screenshot below)

Note: You can also export the scan results by clicking on Export summary from the main Malwarebytes results page and then clicking on the Export button from the scan report. (click to enlarge screenshot below)

You can now close the Malwarebytes interface and continue using your computer if you like.

Do I Have to Complete All the Methods Before the Malware Is Removed?

No, you do not. Your computer will often be removed from all malware by using one of the methods available. It’s when you try one method, and the malware remains that you should try another method in the tutorial.

Are the Methods Listed in Order of What Should Work Better?

Not necessarily. We often put the Windows Security before third-party applications because if you use Windows, you might prefer solving the problem without having installed another program on the computer. Windows Security is also free to use for your duration of using the operating system, which could mean more convenience to you.

Do I Have to Complete All Parts of the Windows Security Tutorial?

No, you do not. We have listed all the different ways you can run an antimalware scan with Windows Security for your convenience, but you only need to choose one of the methods to remove the malware.

Sometimes you may need to be able to get access to all options of running an antimalware scan—especially if your computer is currently being affected by the malware—which is why we have listed all the ways you can run scans with Windows Security.

Why Do You Have a Tutorial for Android but Not for iOS?

Both apps should be very similar, so we chose one app for the tutorial at this time. We may update it in the future if and when the tutorials differ enough to require separate tutorials for both platforms.

Since Android is currently the more open operating system of the two—and therefore potentially more susceptible to malware—it makes sense that in theory, more people will potentially get malware on Android than iOS at this time. What’s more, you also get far more applications to choose from on the Google Play Store than with Apple’s App Store because Android has more users.

That said, the only reason Android is more open is that people choose to open it—it does not automatically come that way out of the box. So we are not necessarily suggesting that iOS is naturally more secure than Android.

Mathew Diekhake is a certified Microsoft Systems Administrator from Australia and also the Founder and Editor of ConsumingTech.com. He is Windows and Android obsessed but has spent stacks of hours learning about a variety of computer software, both formally and informally. Mathew has obtained many Microsoft certificates and is a qualified Systems Administrator (MSCA). Read Mathew's full biography. Mathew's social profiles: Twitter, Facebook, Instagram, LinkedIn, GitHub.
« How to Remove Adware, Unwanted Ads & Other Malware from Windows 10 (Malware Removal Guide) » How to Remove ShopAtHome.com Adware (Malware Removal Guide)