Home » Tech » How to Jailbreak iPhone & iPad on iOS 8.1. with PP Jailbreak

How to Jailbreak iPhone & iPad on iOS 8.1. with PP Jailbreak

The last two major software updates for Apple’s iOS have proved difficult to crack. The same old trusty group of guys including Pod2G struggled immensely to release anything timely publicly.

That opened up the doors for a group of students from a Stefan Esser class to come up with the Pangu jailbreak release. Since then we have had several Pangu releases, and today a new tool is up for grabs called PP jailbreak. 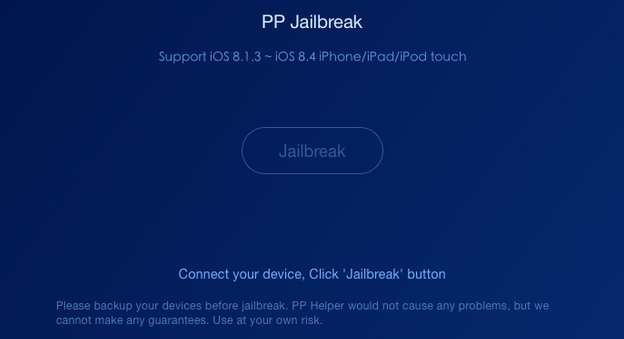 The PP jailbreak is of Asian decent once again just like Pangu which makes it difficult for us English-first speaker to grasp what’s on the screen. That doesn’t matter to you, though, because we have the step-by-step guide which you can follow that comes with detailed explanations for the right buttons to press.

HOW TO JAILBREAK IOS.8.1.2 ON MAC OS X WITH PP JAILBREAK

I’ve included the screenshot that you’ll see after downloading the program to the computer. Now you can see the boxes I’m describing during the steps. You don’t need to notice anything on the screen apart from the button and the small box with the tick.

Mathew Diekhake is a certified Microsoft Systems Administrator from Australia and also the founder and editor of ConsumingTech.com. With a never ebbing desire to cover technology, he is mostly consumed by Windows, Linux, and Android. However, he has spent stacks of hours learning about a variety of computer software, both formally and informally, and has authored tens of thousands of tutorials and news articles since 2011. Mathew has obtained many Microsoft certificates and is a qualified sysadmin (MSCA). Read Mathew's full biography. Mathew's social profiles: Twitter, Facebook, Instagram, LinkedIn, Github
« How to Install TWRP Recovery on LG G3 (Verizon VS985)» How to Install Lollipop ROM on Nokia X/XL