How to Check Size of Apple Watch Face Online via iPhone

As I’m sure the Apple fanatics among you already know, the next-generation of wearable tech in the fruit companies long list of devices is soon to be the Apple Watch after it’s release date comes and goes. We’ve already seen the launch date of last years Apple event. However, it’s been an usually slow process since then leading up to the release.

The one knock-back the new range of wearables from Android and Apple, as well as many other companies such as Qualcomm, is that they are too expensive. It’s an interesting argument considering they are priced roughly around what you would pay for a standard watch with two hands. Nonetheless, a quick look around the web will tell you it’s a price people aren’t willing to pay. Furthermore, new research out this week suggests that over 50% of people across the United States think the Apple Watch is over-priced. 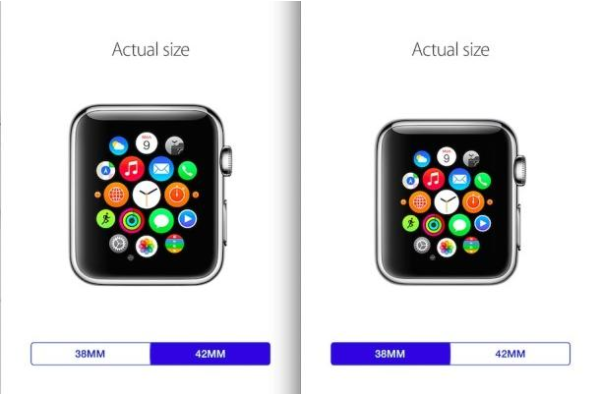 One way to help you choose whether you want to fork out the money to buy the Apple watch is having a good look at it before you buy. Unfortunately, nobody is going to let you try before you buy unless you want to slap the watch on your wrist a few seconds before saying yes or no at the shop. However, there is a way people online can get the life-like scale of the Apple watch face on the displays of their iPhones. We’ll show you how to do that after the jump.

How to Display Life-like Apple Watch Size on Your Phone

1. Turn on the iPhone and unlock the passcode.

2. Tap on the App Store app icon to enter the store.

3. Navigate to the ‘featured’ section and tap on the ‘watch’ option at the top of the display.

4. Tap over the “compare case sizes.”

5. Tap the two options at the bottom of the display, which toggles between 38mm and 42mm.

Smartwatches have been known as a flop to date—that is all of them but the Apple Watch. If you’re going to get one, it should probably be from Apple. At least the you’ll know that other people are actually wearing what you’ve got.

The only thing with the Apple Watch though is that they’re expensive, just like every Apple always is. The opportunity to try out what the Apple Watch is like online via a website, so you can get a realistic taste is just the thing to prevent people from having to take a massive gamble with their money. Now at least you’ll know exactly what you’re getting.

Mathew Diekhake is a certified Microsoft Systems Administrator from Australia and also the founder and editor of ConsumingTech.com. With a never ebbing desire to cover technology, he is mostly consumed by Windows, Linux, and Android. However, he has spent stacks of hours learning about a variety of computer software, both formally and informally, and has authored tens of thousands of tutorials and news articles since 2011. Mathew has obtained many Microsoft certificates and is a qualified sysadmin (MSCA). Read Mathew's full biography. Mathew's social profiles: Twitter, Facebook, Instagram, LinkedIn, Github
« How to Change Mac OS X Root User Passwords» How to Update Google Nexus 6 to Android 5.1 Lollipop with LMY47D Factory Image