Here’s what you need to download the official BLU Studio 5.0 LTE Y530Q firmware flash file onto your computer. You can then use one of the compatible flashing tools to update the firmware on your smartphone or tablet.

Flashing tools were initially developed by the companies that were associated with the device’s hardware, kept in-house, used in the back rooms of smartphone repair centers to fix common mobile device-related problems. The tools were later published on the Web for anyone to use. Now you can solve the same kinds of issues that were once left up to those repair centers: bootloops, soft-brick situations, software errors, software bugs, update errors, so forth, by downloading the software onto your computer at home instead. What’s more, installing the BLU Studio 5.0 LTE Y530Q flash file is an easy task, thanks to the flashing tool’s user-friendly interfaces that usually require just one click before the flashing is underway.

The flashing tools such as the smartphone flash tool are always computer applications. On most occasions, these apps are relatively small files and will not take up much hard drive space.

You can sometimes have a choice of what flashing tool you want to use to flash the BLU Studio 5.0 LTE Y530Q stock firmware file. You can flash Stock ROMs with tools that work for either the system chip found in the device’s hardware, the firmware file type, or on occasion, apps that are designed to work for a particular manufacturer.

Here is how you can use the Qualcomm Flash Image Loader to install firmware on a smartphone or tablet with a Windows computer:

1. Install the latest version of the OEM USB driver on the same computer that you plan on using for the installation of the flashing tool.

If there is no OEM USB driver for your device, install the Universal ADB driver instead.

2. Download the latest version of the Qualcomm Flash Image Loader (QFIL) file on the computer, and then extract the file by right-clicking on it and choosing Extract from the menu.

3. Open the Qualcomm Flash Image Loader (QFIL) folder, and then double-click on the QFIL application so that the flashing tool launches.

Tip: It’s the file with the green icon.

4. Turn off the smartphone that you want to flash and hold the Volume Up key and connect it to the computer with the USB cable.

The smartphone should now be in EDL mode (Emergency Download mode) and ready for the firmware flashing. If yours is not in EDL mode, use a search engine to find how to get your specific device into EDL mode. 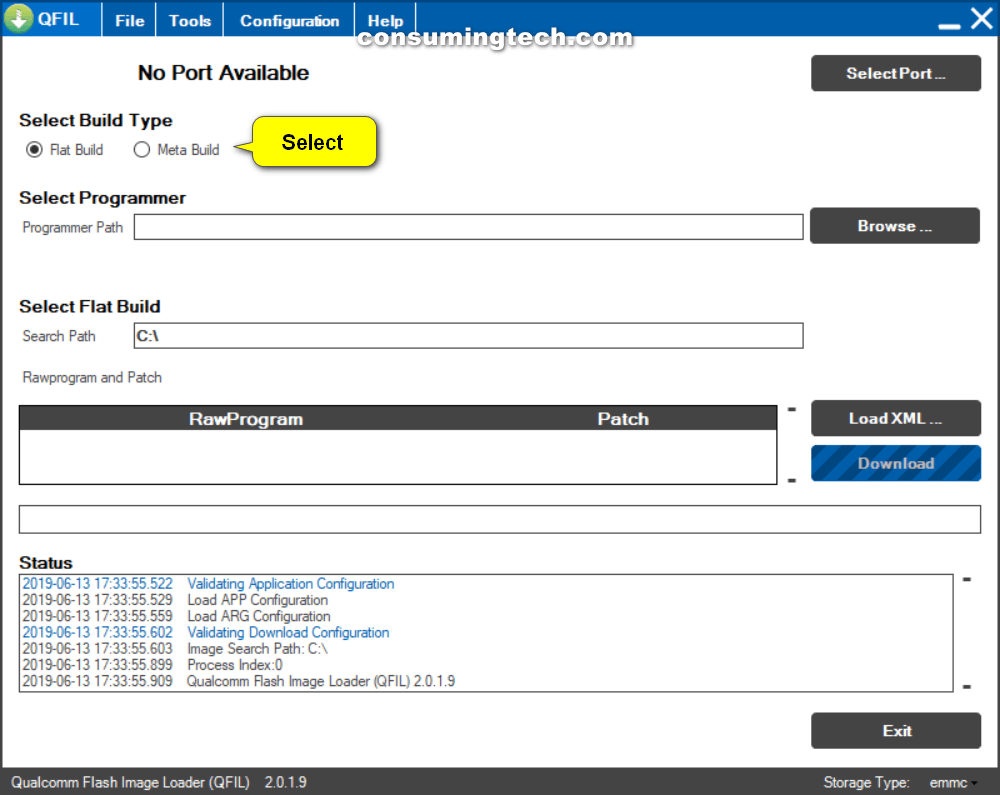 6. Under Select Programmer, click on the Browse button and upload the firmware file that you’re looking to flash to this location. (click to enlarge screenshot below)

The firmware file you need is often the file with the “.mbn” extension at the end.

8. Give QFIl a few seconds to load the rest of the data automatically.

Note: Firmware files can be quite large and subsequently flashing can take 10 minutes or sometimes even longer. You know the firmware is flashed when the device reboots for the last time.

There can often be a variety of ways to unroot a device that runs Android, and they depend on what method you used to get root access. If you installed SuperSU for root access, then you can open the app and find the option to unroot directly from SuperSU’s settings. On the other hand, if you do not have SuperSU, and you do have a BLU smartphone or tablet, then you can always unroot by installing the stock firmware. Once you have followed the guide above, your device will automatically be unrooted. You can verify that is the case by installing one of the many applications from Google Play that checks for root access. As long as you are using a reliable app, then typically it will not lie about the root status of your mobile device.

Mathew Diekhake is a certified Microsoft Systems Administrator from Australia and also the founder and editor of ConsumingTech.com. He is mostly consumed by Windows and Android but has spent stacks of hours learning about a variety of computer software, both formally and informally, and has authored tens of thousands of tutorials and news articles since 2011. Mathew has obtained many Microsoft certificates and is a qualified Systems Administrator (MSCA). Read Mathew's full biography. Mathew's social profiles: Twitter, Facebook, Instagram, LinkedIn, GitHub.
« How to Install BLU Advance 4.5 A310i Firmware Flash File » How to Install BLU Life One XL X020Q Firmware Flash File